Home Information for Educators I am because you are 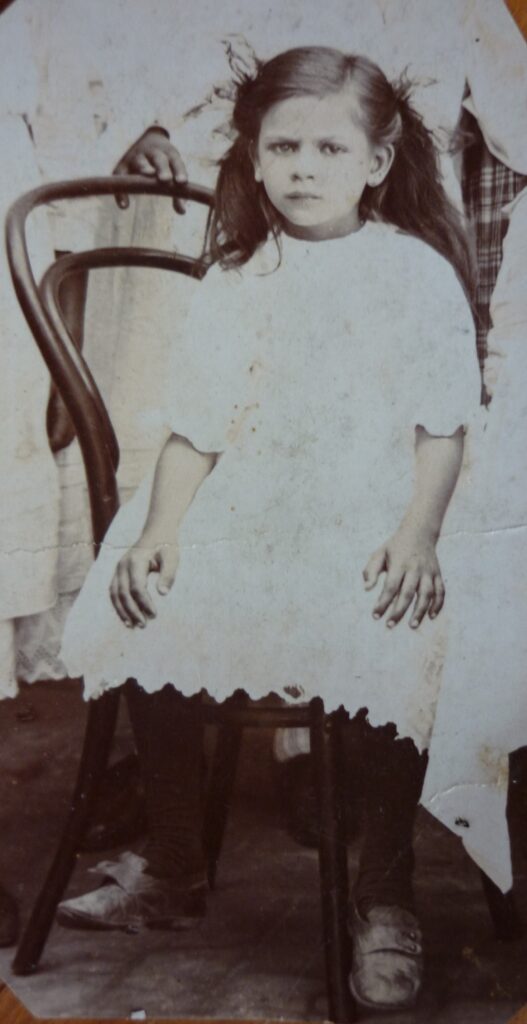 Are quite the saddest eyes

Does she know where she is going?

Or has she already been?

Is it because of her yesterdays?

Or has she seen her tomorrows?

What do I see?

Sophie’s eyes looking back at me.

My maternal grandmother, Sophie, constantly reminds me to find her lost parents.  Whenever I am in danger of giving up, I sense her presence tugging on my sleeve, checking in over my shoulder, prodding me to keep searching.

The last time I saw Sophie was in a dream.  It was one of those dreams that occur somewhere between the spiritual and physical planes, between a dream state and wakefulness.

The two of us had entered an old postal office with an imposing dark wood store counter spanning the width of the room.  A man, with glasses perched on his nose was standing behind the counter, with a huge book in front of him.   I assumed he was the Postmaster, and as he scrolled through the book looking for Sophie’s name, I also assumed we were there to collect a parcel.

“Aha! Here you are!” said the man, pointing to a place on the page where he found Sophie’s name, “Come through.” He raised a section of the counter top to allow Sophie access, with me following closely behind her.

“Oh no!” the Postmaster solemnly declared with palm raised, and glared directly at me over his glasses.  “You are not allowed in, child.”   I started to cry, and Sophie turned towards me, gave me a reassuring hug, and repeated in a gentler voice that I could not follow her where she was going.

As the Postmaster slammed down the counter top between us, I watched as Sophie disappeared through another door on the other side, tears streaming down my face.  A phone started ringing somewhere.  I woke from my dream state to the sound of our home phone ringing, and hearing my mother’s voice as she answered the phone.  It was a call to say that her mother, my grandmother Sophie, had passed away peacefully. The tears from my dream were still rolling down my cheeks.

Sophie was born circa 1910 and celebrated her birthday on the 22 April each year.  There are no official documents to confirm her exact date or place of birth.   The unconfirmed family narrative was that she was born to a Jewish family. From a very young age (possibly between 4 and 8 years old) and for reasons unknown, she was left in the temporary care of a Christian family.  The Van Der Bergs, who were originally from Kimberley, Orange Free State, South Africa, were given instructions relating to Sophie’s care and dietary requirements in accordance with Jewish traditions.  Sophie’s family never returned for her and she was subsequently raised to adulthood by the Van Der Bergs in Durban, Kwa-Zulu Natal.

When Sophie was 20, she married my grandfather and they were blessed with six children – two daughters and four sons.  My mother was Sophie’s third child and her second daughter. 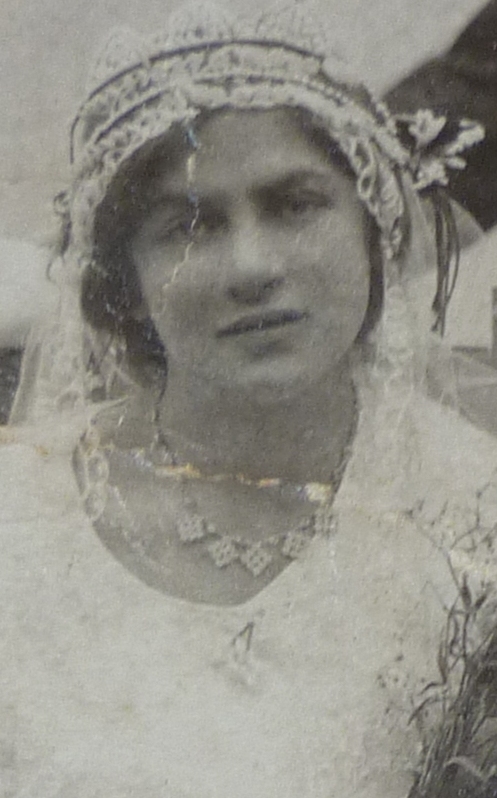 Soon after immigrating to New Zealand in the late 1990’s with my husband and our four sons, I attended a Mātauranga Māori course at university as part of my initial teacher education programme.  It was here that I first learned about the significance of whakapapa (genealogy) in Māori culture, and the role this knowledge plays in identity formation and a sense of belonging.   Egan Bidois provides this explanation of the importance of whakapapa:

“Whakapapa is our certainty when all else may be questionable. Whakapapa is the anchor and the rock upon which we can tether ourselves to in the storms of confusion that may come during times of crisis. Hence the importance of whakapapa to Māori.  It serves as an acknowledgment and a reminder of whence we came, of our lineage and our heritage.”

This ability to cite one’s whakapapa back many generations profoundly resonated with me and I was again reminded of the deep sadness that Sophie felt about not knowing who her parents were or where she came from.  Sophie’s descendants carry this deep sadness too, and it can manifest as inter-generational trauma.

Fast forward to recent years, and DNA testing.  My uncle (Sophie’s youngest son) and my mother, both in their 80’s, agreed to a DNA test.   The results confirmed their Ashkenazi Jewish heritage and this discovery led me on a genealogical journey which helped me to locate some branches of the extended families from which Sophie came.

These families arrived in South Africa in the late 1800’s and early 1900’s during a time of revolution and counter-revolution from a region that today spans Lithuania, Latvia, Finland, Poland, Belarus, Ukraine.  At that time, these regions were under the autocratic rule of the Romanov dynasty and the Russian Empire, which began its demise in 1917 with the abdication of the Tsar, the seizing of power by the Bolsheviks, and the subsequent murders of the Romanov family in 1918. These were violent times resulting from economic hardship, government/regime corruption and inefficiencies, growing nationalism, religious intolerance, dissatisfaction with autocratic rule and the state’s control of the church, discontent amongst ethnic communities under Russian rule (Lithuania, Latvia, Finland, Poland, Belarus, Ukraine) to give up their own culture and language in favour of Russian culture and language; and in the midst of all of the chaos existed widespread antisemitism as Jews were targeted as the root cause of all these religious, social, political and economic problems.

Up until the 1917 Russian Revolution, 95% of the 5.3 million Jews of the Russian Empire were forced to live and work in an area designated for Jews known as The Pale of Settlement.  The area today falls mostly in Poland, Lithuania, Ukraine, Belarus, Russia and Moldova. Over the years prior to and during WW1 (1821; 1881-1884; 1902-1906; 1917-1921), these Jewish communities were subjected to a series of large-scale organized massacres known as pogroms which continued between, during and after the world wars (1929; 1938, Kristallnacht; 1941-1944, Holocaust; 1946).  Around 2 million Jews fled the Russian Empire between 1880 and 1920, with many eventually emigrating to the USA, the UK and her colonies, of which South Africa was one. As many as 80% of all South African Jews originated from The Pale of Settlement with more than half coming from 5 shtetls (towns) in Lithuania (Panevezys, Rietavas, Palanga, Joniskis, Siauliai) and this can be attributed to “a single wave of anti-Jewish violence in Lithuania which spread through northern Lithuania during the first half of the summer of 1900”.

Sophie’s extended family were part of that migratory flow of Lithuanian-Polish Jews fleeing the Russian Empire with at least two branches of the family arriving in Cape Town circa 1902-1906. The Jewish population increased in South Africa from 4,000 people in 1880 to 40,000 people by 1914.  This migratory flow ended abruptly with the outbreak of WW1 in July 1914 when Germany declared war on Russia, creating a combat zone known as the Eastern Front, which cut right through the Pale of Settlement.

The situation in South Africa was no better during this period, as the 1917-1918 global pandemic known as the Spanish Influenza or the Black Death raged through the colony towards the end of WW1.  Howard Phillips, Emeritus Professor of History at the University of Cape Town in his article ‘South Africa bungled the Spanish Flu in 1918.  History mustn’t repeat itself with Covid-19’ wrote of that period that “South Africa was one of the five worst-hit parts of the world. About 300,000 South Africans died within six weeks. That represented 6% of the entire population.”  In an interview he said “it was most significant that those who died in the largest numbers were young adults, 18 to 40-year-olds.  These were, inevitably, young parents. It led to the creation of orphans on an unprecedented scale. I estimated about 900,000 orphans in South Africa.”

While the confirmed DNA matches have narrowed my search for Sophie’s parents down to a particular extended group of families, I have not yet been able to pinpoint where Sophie fits within their family tree.  I still have so many questions:  Was Sophie born in The Pale, en route to South Africa, in South Africa?  Why are there no official records of her birth?  Was Sophie a ‘secret’ i.e. illegitimate and/or the result of an affair?  What were her birth parent’s names and surnames?  Why was Sophie fostered by a Christian family and not blood relatives?    Was it a coincidence that Sophie shared the same first name as her foster mother?  Did her foster parents name her and if so, what was her real birth name? Did Sophie’s parents return to the Pale of Settlement to rescue family and return to South Africa?  Why didn’t they return for her?  Did they get caught up in the onset of WW1 and the pogroms?  Did they succumb to the Black Death/Spanish Influenza?

As the first person in my immediate family to immigrate from South Africa to New Zealand, I often think of my grandmother’s family who were forced to leave their lives and rich cultural heritage, language, and customs behind, to rebuild a new life in a new country on the other end of the world for their children’s future.  In this sense, I have walked in my ancestor’s shoes but without the horrors that they experienced.  I want my descendants to know their roots, to know where and who they came from, and to be able to cite their whakapapa from the Pale of Settlement to South Africa to Aotearoa-New Zealand.  This whakatauki (Māori proverb) and izaga (isiZulu proverb) and their loose translations, sums it up:

Ehara taku toa I te toa takitahi – engari he toa takitini kei : My strength, my accomplishments, my being is not that of one person – but of many.

Umunutu ngumuntu ngabantu : A person is a person through other people.

In other words: I am, because you are.